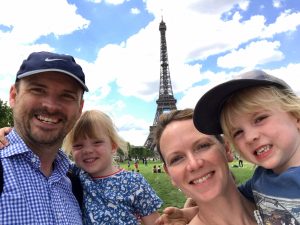 I have always thought that faculty in the Department of Economics should “get out” more. During my tenure at Appalachian, I have offered courses in Watauga College, the General Honors Program, and the University Studies Program. I visited at Virginia Polytechnic Institute and State University (VPI) and The University of Sarajevo under the Fulbright Exchange of Scholars Program. In addition, I taught many of our regular course offerings off-campus at Western Piedmont Community College, Surry Community College, and Winston Salem State University.

In 1981, I was appointed to a three-year term as a University Scholar , an experimental program in which faculty and promising students met monthly to discuss great ideas and great books. Each faculty member served as a mentor to one student. This was a rewarding experience for me but unfortunately the scholars’ program was discontinued after two years. 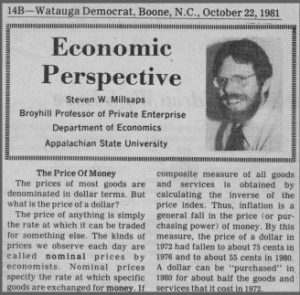 ginning in the Fall of 1982, I began writing a bi-weeklycolumn in The Watuaga Democrat entitled “Economic Perspectives”. For three years I wrote a six-hundred word article on the economic issues of the day with the goal of educating and entertaining local readers. Some articles took longer to prepare than others, but the average piece took about five to seven hours from start to finish. Writing simple declaratives sentences to explain sometimes complex economic issues was a challenge. I must confess that I don’t think the column had much of an impact on the economic I.Q. of our local citizens. There were only two Letters-To-The Editor, both negative. Dr. Bill Ward, then of the Department of English said in a roast, “I like to take a bowl of popcorn and an “Economic Perspective” to bed at night. That way I can go to sleep with nothing on my stomach and nothing on my mind.”

Appalachian State University is a regional university in the North Carolina system. An important part of faculty teaching obligation is service to the region. While at Appalachian I gave speeches to The Boone Chapter of the Jaycees, The Boone Chapter of the Kiwanis, The Boone United Church Environmental Workshop, The North Carolina Council of Churches , The Southern Regional Faculty & Instructional Consortia , Phi Beta Lambda , The Reidsville High School Teachers Energy workshop, and The Great Decisions Forum on campus.

Each year the Department of Economics conducts the Brashear Prize Writing Competition . Students submit research papers to a Reading Committee that judges the merit of the work and awards cash prizes at an annual dinner at the close of the academic year. I served as Chairperson of the Reading Committee and served as the faculty mentor on student papers.

In 1987, with the federal budget deficit was running at historically high levels. This topic was receiving considerable coverage in the press and there was a lot of discussion on and off campus about the costs and benefits of large budget deficits. Dr. Larry Ellis and I, in an effort to educate our community on this important topic, brought together on our campus 1986 Nobel Laureate Dr. James M. Buchanan, North Carolina Senator Terry Sanford, and Dr. Robert J. Barro of the University of Rochester. Dr. Barro was famous for his research on rational expectations and government fiscal policy. Attended by economists and political scientists from all over the Southeast, this conference elicited extensive press coverage both state and national.

At one time, three television stations were on campus interviewing the participants. Dr. Ellis and I published the Conference Proceedings which were widely circulated. The amount of time and effort to find a day these men could find their way to Boone was enormous. I think Dr. Buchanan  wanted to have the forum and was instrumental in persuading Professor Barro and Senator Sanford to come to Boone.

In 1989, when the Berlin Wall fell, many countries in Russia and Central Europe (Hungary, Poland, e.g.) renounced socialism and began a process to transfer their economy to a capitalistic system. In economic science, this was a watershed moment….entire countries were in the process of changing their economic system from a publicly owned and controlled one to a privately owned and controlled one.

After the fall of socialism in Russia and East Central Europe, Clinton Parker, Marvin Williamsen and some other faculty formed a committee called the East Central European Committee. I was asked to join the group. In April of 1994 and 1995 this committee organized and produced two international conferences titled The First and The Second International Conference on the Economic and Political Transformation of East Central Europe . Both conferences were on our campus and students, faculty, staff, and local citizens were invited. The conference featured economists, historians, political scientists, and government officials from almost every country in Central Europe.

My doctoral dissertation on tax policy affecting the United States Petroleum Industry led to three published testimonies before the U.S. Senate Committee of Finance, the U.S. House Committee on Ways and Means, and The Joint Economic Committee. This work helped reshape government tax policy toward the petroleum industry. For example, repeal of the percentage depletion allowance, one of the suggested reforms, was adopted just two years later. [See Published Testimony Page]